Hello stampers.  Tonight I am excited to be playing along with the StampTV Center Stage Alumni team.  If you arrived from Miesje Flach blog then you have landed on the next blog in the loop.  If you are just checking in at my blog first .... then head on over to Vicki's blog to start the hop.

Carolina Buchting (Gina K. Designs DT ) has put together a wonderful blog hop and one blessed blog hopper will WIN a free grab bag of Gina K Designs products!!  Leave comments along the way on each blog for a chance to win.  There will be an announcement of the winner over at StampTV on Tuesday Oct 15th. 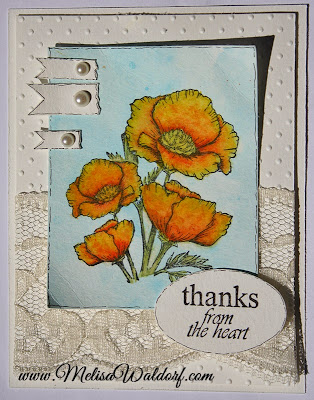 For this CSS Blog Hop we were challenged to create a card with the sketch below.  We would love for you to play along as well HERE .

My card was designed using Melanie's "Stately Flowers 1 ".  So many gorgeous images in her Stately Flowers series.  I decided to play with my water color crayons for this one.  I took a few close-ups and will share them at the end of the post. 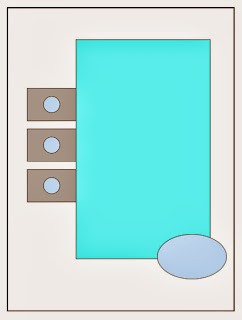 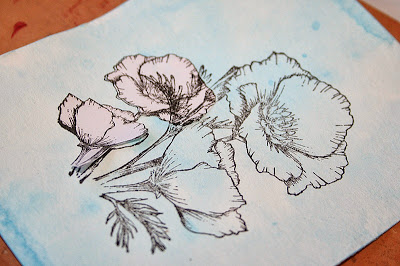 I started out by creating a soft water color background.  I used NeoColor Watercolor II Crayons.  I also own Lyra as well.  I like the Lyra better (I think they are creamier), but only had a 6 color set, so I decided to give the Neocolor II a try for more color options.  Of course since them I found that you can get more colors with the Lyra as well.   I used some inexpensive water color paper from Target.  It for children.  The reason I liked it was because of the flat surface.  It was smoother and easier to stamp on than some of the water color paper I have used in the past.

I brushed some water over the entire panel ... then picked up some blue pigment  from one of my water color crayons and tried to randomly apply it.  I wanted a  mottled / soft look.  I heat dried the panel.

If you take a look at this particular set HERE comes with 2 different sizes of a California Posie.  I wanted to use both so I had to do some masking.

When ever you are working with 2 images and layering them you need to mask the image in the forground before stamping the image in the background.  I use Eclipse Masking Tape.  In the photo above I had stamped the smaller image / foreground image, stamped it again on the masking tape, trimmed out the image, and then covered the image stamped on the panel.  It has a pink hue to it in the photo.  Then I stamp the larger / back ground image over it. 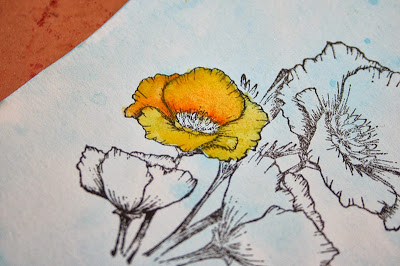 This is the result.  I played around with the first 2 petals and then decided I would try to shoot a few step by step photo's in case anyone was interested.

I started out dipping my brush in water and then loading it with yellow pigment from my water color crayon.  I don't "rub" the paint on because the paper is cheap and it will break down, but the other reason is because I have that blue in the background and it could mix with the yellow to make green.  I definitely didn't want green on my petals.  I just patted it on.  I wanted the color uneven so I let the paint flow where ever it wanted. 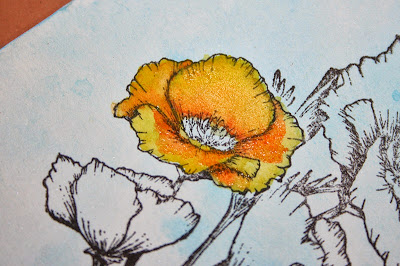 Next I switched to orange and patted it on.   While it was still wet, I reloaded with some yellow and patted from the outside edge of the petal in to try and blend and get rid of that harsh line you see with the orange. 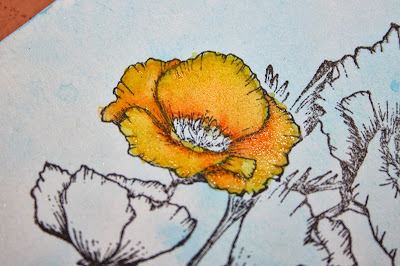 Sometimes it's a little hard to control the paint, so if I needed to, I added a little more orange to try and add depth / shadowing.  Water is your eraser.  So if you go out of the line a little, sometimes you can rub a little water over it and pick it up with a paper towel.

Hope you enjoy the hop and are inspired to try using some watercolor crayons!
hugs, Melisa

You can check out all my Gina K. Designs Projects  HERE.
Posted by Melisa Waldorf at 7:00 PM

So glad you could join us this time Melisa!! Your card is gorgeous!! This is one of my favorite GKD images!!

Beautiful coloring! Thank you for your instructions! That is always so helpful for me!

Awesome coloring Melisa! Thanks for the instructions.

Oh, wow, Melisa....your card is fabulous, thanks so much for sharing the details. BTW...you'll figure out the link as soon as Carolina gives it to us!!! LOL.

Beautiful Card, your coloring is perfect!!

Beautiful card Melisa!! The coloring is amazing and LOVE the instructions.
Will email you soon... :) Love seeing your designs pop up in magazines!

Beautiful card Melisa - I too love working with my watercolour crayons and you have inspired me to use them more :-).
Lovely to see you blogging again
Blessings
Maxine

Love the watercolor crayons and your tutorial for using them. You colored Melanie's flowers beautifully. Love your card. I will definitely be looking into the crayons, thank you for the inspiration.

Your card is very beautiful. I love the addition of the lace

Beautiful, I love those flowers and thanks for telling us how to do it. Hmmmm. . .nice coloring with those crayons I'll have to check them out.

Melisa, your card is so beautiful! Wonderful watercoloring!

totally gorgeous on the watercoloring! Love this creation!

This is so beautiful!

Glad to have you joining us this month! Beautiful colored flowers

Love your card, and really appreciate the step-by-step instructions. I've been meaning to try something with watercolors, and now I can see I have to get started!

What a great sketch and I adore the card you made using it. So beautifully colored and then framed with the lace. Awesome!

Love the coloring on your card! I haven't tried water coloring, but appreciate your step by step.

Beautiful card. Your coloring is awesome. Thanks for providing the details. Love the lace too.

I LOVE what you did with your card! The coloring is gorgeous!

Such a pretty card.

Very beautiful card...love the colors and the the texture of the card in general!

Your coloring is simply gorgeous, Melissa. Great technique and lovely card the 'pops'.

Beautiful card! Your coloring of the flowers is so pretty!

I love the way you colored and used the poppies. Great job.

Great card - I love the addition of the lace background.

Wow - the blending is spectacular

Beautiful! Thanks for the detailed instructions.

Beautiful card Melisa!! Glad you could join us.

Wow, those poppies are fantastic, Melisa!

This card is terrific!! Thanks for showing all the pics and tips with the crayons, I am receiving some soon and look forward to playing!

Gorgeous card and details on the coloring.

STUNNING! Saw it on STV and fell in love with it! :)

Love the coloring. Thanks for the tutorial!

I love your flowers. The colors are bright and pretty!

The coloring is great, and I really like the way you've made the banners different widths.

Lovely coloring. Thanks for all the tips. Beautiful card. Thanks

Beautiful coloring,thanks for the tips.

Oh, wow! I have some wide lace that has never been used and I'm going to borrow your idea. Stunning card.

Gorgeous card! Beautifully coloured, and love the touch of lace!