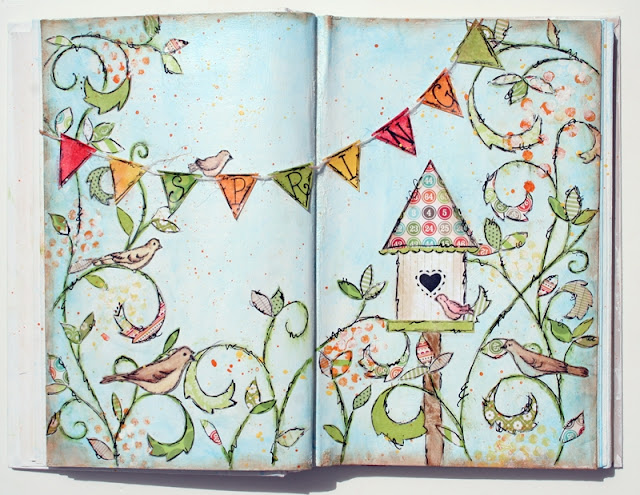 When I started the "Art of Wild Endangerment" class, I told myself I was going to just stick to sketching in a sketch book right now, because I seriously have sooooooo many other things I need to be doing.   But ....... the more I watched Junelle add her art to her altered book  .... I had to take the time to get my own started.  So I selected an old book, tore / cut out pages about every 4 page and started adding gesso.  I used gesso to adhere 4 page together at a time so my pages would be sturdy.  After I removed pages and adhere some together, I started adding gesso to all the pages and outside of the book.  Then I added my first sketch / art journal project!  I haven't journaled yet, but left space so I could add that later.  I'm addicted!  I have to work the next 2 days, so I really do need to get some house work done, teehee.  But I just want to work on my journal!  This is what my daughter would refer to as a "first world problem".

So I decided to take the time to share my step by step process, just in case someone is interested in giving it a try.  Below you can find my VERY long, and very boring explanation!  Other wise that's it for the day!  thanks for stopping by and I hope you have a joyful day creating!
hugs, Melisa

I started out creating a blue background using water color paint and a "mop" paint brush.  I would put a little on and then use a paper towel to dab some off til I got the look I wanted.  I didn't wand a solid background on this one.  Not sure you can tell on the photo, but some of the white gesso is showing through. 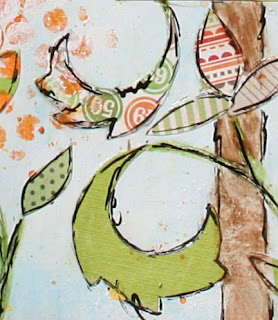 I had a old flourish stamp that had the cool deco leaves on it, so I used that as my inspiration and started by sketching (with a mechanical 07 pencil) flourish's.  Then I sketched the "deco leaves".  At this point you could just paint them in, but I decided I wanted to paper piece these.  Sooooo ...  I used tracing paper to trace each one, then positioned the traced deco leaf over the patterned paper.  After I was happy with where it was positioned over the patterned paper, I slid some carbon paper under the tracing paper and lightly penciled over the design, transferring onto the patterned paper.  Now you just trim and adhere.  I had to decide how I wanted to adhere the paper.  I could use Mod Podge, but that gets a little messy and usually ends smearing from underneath whatever I gluing down, leaving a shiney area.  Or I could use my Aleene's Tachy Glue.  When I took Christy Tomlison's "She Art" class, she Mod Podged everything.  I think because she liked how she could continue to smear her Neocolors or other mediums over it.  She also applied the Pitt pens over the Mod Podge as well and then was able to smear it to add shadow / distressing.  So I decided to go with Mod Podge.  But at this point, I didn't cover the whole page, just used it to adhere my paper pieces.   The smaller leaves were much easier.  I did't bother sketching them, because that's such and easy shape to cut.  So I cut a bunch of them from differnet patterned papers, positioned them on the page, and adhere.  Next I used a green water color pencil add added paint over all my sketched stems / vines.  I didn't put the color directly on the page.  I wet my brush, wipe the end of the brush over the end of the pencil to pick up the paint and then apply it to the page. 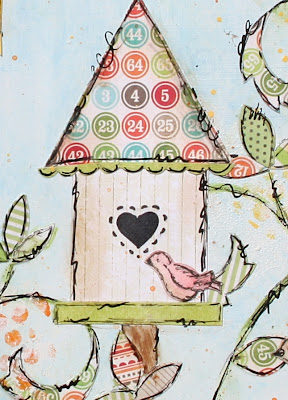 Next I trimmed patterned paper to create the bird house and a few of the banner flags (green).  I didn't have the right color patterned paper for the other colors, so I applied watercolor paint to some watercolor paper and cut them.  I used a font stencil for the letters on the banner.  Punch little holes in the corners (Fiskar's 1/16" ?? I think) and ran jute through them.  Adhered those pieces on with Mod Podge as well. 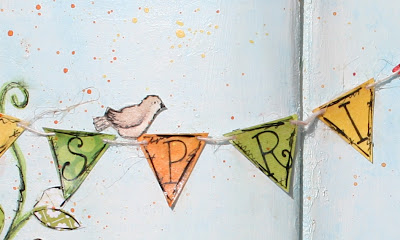 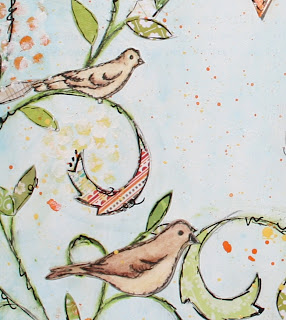 I sketched my birds on watercolor paper, add watercolor paints, and trimmed.  Adhered with Mod Podge.  This was my first time sketching birds.  I used a couple of my stamps (the ones on the project I posted monday) to inspire me. 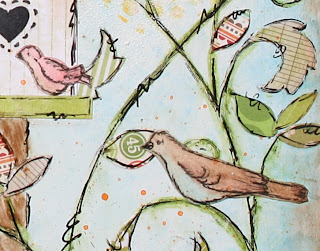 Junelle likes to add little splatters of color to her art.  She makes it look so easy.  Hers look way better than mine.  Basically I just soak a brush wtih watercolor paint and then lightly tap it over the project.

Next I tried to do some doodling.  I had some new pens from Prismacolor and started with those.  Basically I was trying to outline / sketch the lines in now with a black pen / marker.  But it wasn't working out over the Mod Podged area's or watercolored area's (stems / vines).  I think I ruined my pens trying it, because they stopped writing  : (  and I haven't been able to get them going again.  I also tried my Micron Pens, same problem.  I'm not sure why.  Maybe I just needed to let it sit a little longer.  I thought the watercolored area's were dry.  I used the Prismacolor 03 pen and my sharpie on Monday's project over the watercolored background and they worked fine ???  I was very frustrated, because the heart of Christy and Junelle's art is their sketching / doodling with the pen.  The project just isn't finished without it.  So at this point I decided to Mod Podge the whole thing and try a pen Christy recommends.  Here's the problem with her pen ... you can only by it at her shop (seriously ... the company discontinued them and she had them specialed ordered) and they have a wider tip, which I'm not crazy about.  I prefer an 03.  But this pen will write on anything.  After I dried the Mod Podge, I decided to give one more pen a try,  a fine tip sharpie.  I had issue with that one as well : ( .  So I finally went with Christy's pen.  You can find it HERE.

Next I used acrylic paint and punchanella to add the circles you see here and there.  I started wtih the brighter colors and then went over them with white paint to tone it down. 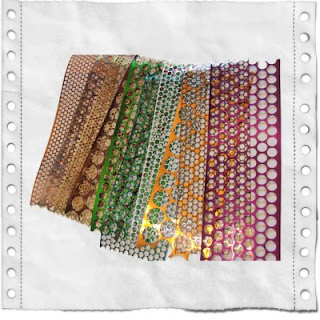 The set from the photo above is HERE.
Scarlett Lime actually has some Punchanella in a "texture" kit HERE.  Christy showed us how to use these pieces in her She Art class to add interest to our backgrounds.

All that's left to do is add some journaling.

If you are new to mixed media and are interested in online classes.  Check out THIS post for a list of online classes (some of them FREE) I am aware of.

Posted by Melisa Waldorf at 3:33 PM

Oh my word. I just popped over from the fb group to see your blog and love all the detail shots you've added here. Your journal page is stunning! I get the not having much time thing, but my goodness, if you make art like this, you should take it/ steal it/ whatever cos it's gorgeous!

Hi Melisa, just stopping by to say how delightful your blog is. Thanks so much for sharing. I have recently found your blog and am now following you, and will visit often. Please stop by my blog and perhaps you would like to follow me also. Have a wonderful day. Hugs, Chris
http://chelencarter-retiredandlovingit.blogspot.ca/