Good Morning!  August 1 begins my fun Guest Designer gig with Creative Cuts and More and my goal is to show you how awesome and easy these products are.
Creative Cuts and More sells pre-cut/pre-scored die cuts.  There products range from simple image die cuts to AWESOME 3-D templates to pre-cut mini albums, and much more!!  If you have ever wanted to create 3-D boxes or bags, this is the way to go.  All you have to do is fold along the scored lines and adhere.  She carries a HUGE list of colors for you to select from.   And why am I so excited?? Because I have always secretly admired all those cool boxes and bags over at SCS, but was to lazy to try it! 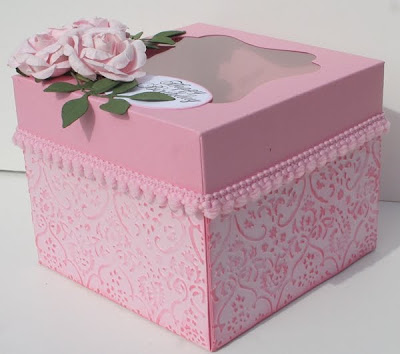 This project is a Cupcake Box.  Perfect to drop off on a co-workers desk or give to a friend.  It comes with this cool insert to hold the cupcake in place and an acetate window.   I put together my box and began embellishing.  I decided to cut panels in a lighter shade of pink and run them through the cuttlebug with an embossing folder.  And then I distressed with pink ink that matched the box.  Then I glued the pom-pom fiber around the edge of the lid.
Now another great option would have been to stamp the box, but keep in mind that you would have to do that before folding. 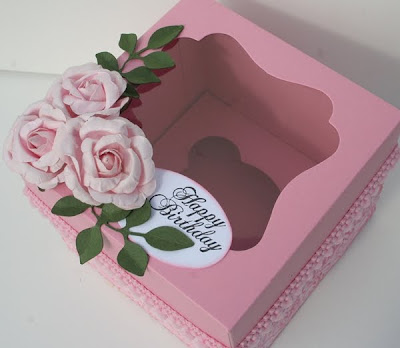 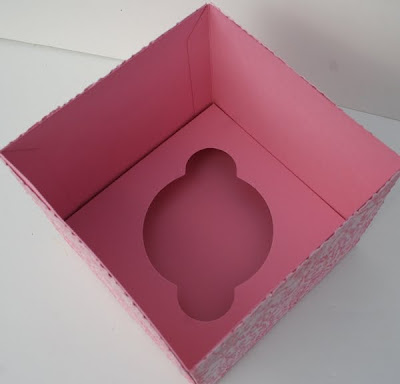 Here is a birthday card I created using the Circle Window A2 card and Cupcake #01 - Small  x 4 ( two pink and two white).  Scroll down for a detailed tutorial.
I'm linking this one to the July Caardvarks challenge to create a Birthday card. 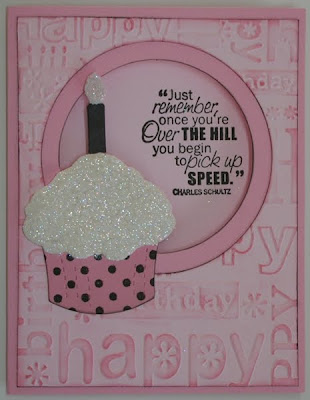 These cards come with different shaped windows for you to choose from.  The pink glitter on the icing on the inside didn't really match, but you get the idea.  And as you can see, I lined up the cupcake on the inside so that it is not visible from the outside. 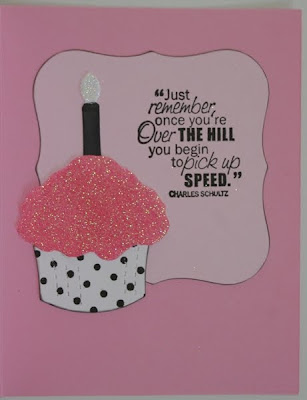 Tip / Tutorial
The Card Front
To create the embossed front of the card begin with a rectagular piece of cardstock that fits just inside the card  front, leaving a border.  Mine is 4 x 5 1/4.  Run it through the Big Shot using an embossing folder of you chose. Place this piece inside the card, lining it up directly in the center as shown below.  Close the card and with a pencil trace the circle on the embossed piece.  This becomes you guidelines for triming out a larger circle/ window. 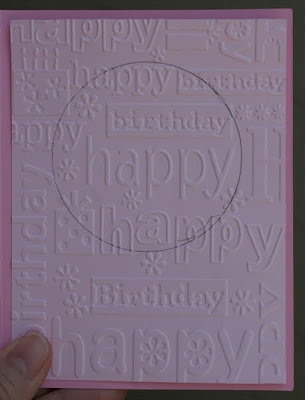 Select a Spellbinders circle die that is slightly larger than your guideline and line it up as shown below.  I use 2 small pieces of clear tape to secure the die in place.  Run it through the Big Shot creating a window larger than the one on the card. 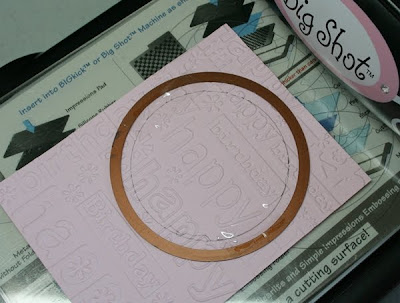 Now your ready to get your fingers inky.  I used Regal Rose (SU) and lightly brushed it over the embossed panel.  With an eyeshadow applicator I brushed on a little Regal Rose aroung the edges as well.  Then I used an eyeshadow applicator to very lightly apply just a little black around the edges.  After it was dry I adhered it to the front of the card.
The Cupcakes
I started with 2 pink and 2 white.  Cut the icing tops away from 1 of the white and 1 of the pink switch them up, layering the white icing over the pink die and vise versa.  Now your pink cupcake liner will have a white icing and vise versa.  DO NOT GLUE them down until you have stamped the liners.  Stamp both the liners with a decorative stamp.  I chose polka dots.  Ink edges black.  Color both candles black.  Cover the pink flame with white pigment ink.  Apply adhesive to both flames and sprinkle with glitter (Stampendous).  Now adhere the white cut out icing on the pink cupcake and vise versa.  I used Liquid Applque on my white icing but didn't like how it looked.  So I applied adhesive (Aleene's Tacky Glue) and sprinkled with glitter.  I did like that it was raised though. The dimension looks really cool.  I should have used my Puffy Paint (local craft store) instead of the Liquid Applique.  It would have been smoother and more like real icing.  Apply adhesive to the pink icing and sprinkle with glitter.  I used pink and it doesn't really match, I should have stuck with the white, because I think the pink would have still shown through the glitter and matched better.
I used a piece of the lighter pink cardstock to create the label on the inside.  I placed it inside the card so I could plan the positioning of my sentiment.  I centered it up and helped to keep it in place by putting a small strip of tape runner on the back of it.  I was afraid I would mess up the sentiment, so that's why I waited to adhere it down.  Close the card.  Choose a birthday sentiment and slide your cupcake over the front to figure out the best position.  Stamp your sentiment.  If you got it right the first time, great (I had to do it twice).  Now you can adhere that inside label.  And adhere the cupcake to the outside.  Now you can slide the cupcake on the inside of the card until you get it directly under the one on the outside.  Glue it down  to the inside of the card.
Your done!!
Please stop back by this month to see all of my Creative Cuts and More projects.  If you miss one, go to the labels on my side bar and click on Creative Cuts and More.  This will bring up all my projects using their products.
You are invited to join the whole DT for a blog hop on August 12th.
Thanks for stopping by and I hope you have a blessed day!
Posted by Melisa Waldorf at 8:30 PM

I love your cupcake box and card set, they are so pretty.
Hugs
Sandra x

Fantastic gift set... really! LOVE how you made the window in the box and framed it with the flowers... beautiful!

Welcome!! Love what I see on your blog:) Thanks so much for the circle window tutorial, I'll add that to my list of cards 'to try'.

Oh my goodness, Melisa! The cupcake box is gorgeous!!!!!!! LOVE that pompom trim!

What a YUMMY post! LOVE that box and your cupcakes are FAB!