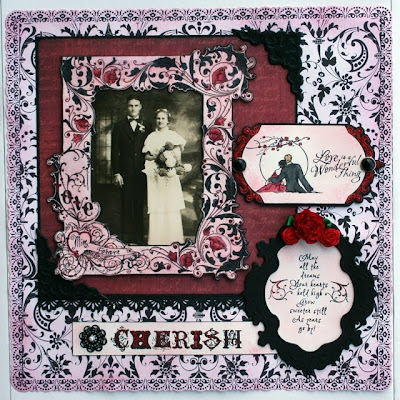 12x12 Layout
I designed this vintage style layout using the "Flourishes" and "Cherish" stamp sets from Crafty Secrets.  I love their stamps and I can't wait til the new release that is coming very soon!! 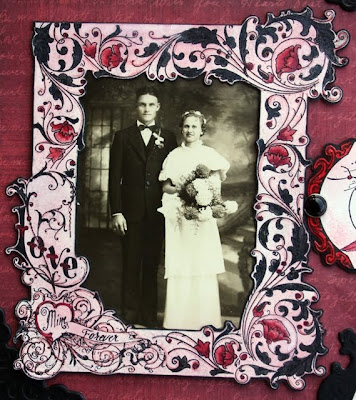 Frame and Masking Tutorial
This is a close-up of the frame I built using masking tape.  If you take a look at the stamp sets, you can see that I used a couple from Cherish, but most of the frame was built using one stamp from the Flourish set and stamping it over and over, masking where needed.  I started with a penciled frame (rectangle) as guidelines on off-white cardstock.  I used the photo size to determine the size of the inside window.  I started stamping in the lower left corner and then continued up the left side, across the top, down the right side, and across the bottom.  I stamped the first image on the left lower corner of the frame and again on Eclipse Masking tape.  I trimmed the image from the Masking tape and then layed it over the same image I had just stamped on the project, masking - or protecting it.  Then I stamped the second image up the left side - "love" and again on Eclipse Masking tape.  Trimmed it and layed it over the same image on the project.  At this point I started using the one flourish image to finish the frame.  Again stamped the image on the project and again on Eclipse Masking Tape.  Trimmed it and layed it over the one on the project.  Seeing a pattern?  Here's the good news ... I can use the same flourish mask the rest of the way around the frame!  I know it's a little extra work creating the mask, but it will be worth it once you finish!  Giving you a one of a kind layout.
Now that it is all stamped, I trimmed out the inside of the frame using an exacto knife and a metal ruler.  I cut the "straight" area's first, stopping when a straight line intersected with a curved area of the image. Then I went back and trimmed around the part of the image that exteded over the pencil line.  That's how I got the unique shape on the inside and outside border.  I used a stipple brush to add red ink and distress.  I also traced around some of the swirls and inside the florals with red prismacolor pencil and blended with OMS to add some color. 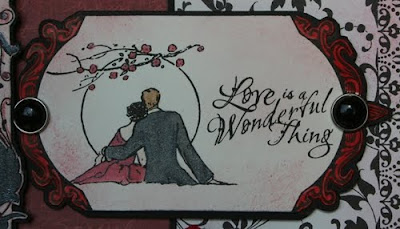 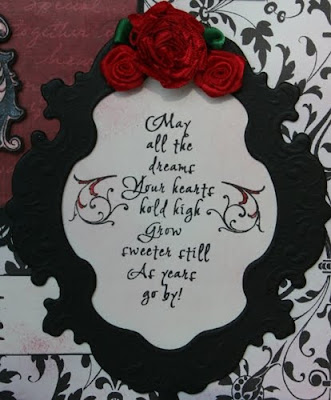 I used Glimmer Chips on corners and here.  I think the patterned paper is Creative Imaginations as well. 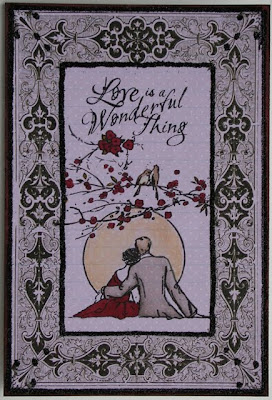 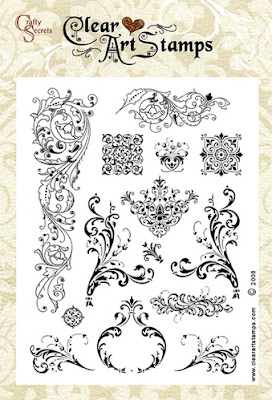 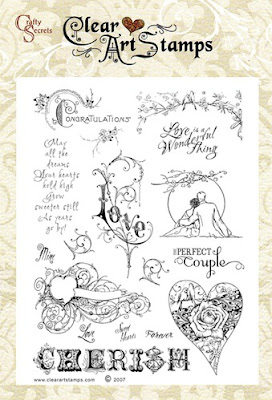 Thanks so much for checking out my blog!  I hope you are inspired to create this week!
Posted by Melisa Waldorf at 10:24 PM

this is beautiful!
love it!
Sandra

This is gorgeous, absolutely gorgeous. I cannot go to that site. I am not going to buy anything new until April 1. But I want to! Darn.

Hello Melissa! Thank you for leaving such a nice comment on my blog! It's funny but I have an addiction to making "spooky art" now! It is a fun challenge! Glad you joined in for the fun!

Your art work is absolutely gorgeous--just spectacular! When I saw your Chartreuse Collection, I knew immediately that you MUST send them as an entry for the Somerset Stampers challenge! Good luck!!

Lovely collection of projects- beautiful stamps! I want everything on their site!!!