There’s no mistaking what time of year it is. With the heat index above 100 right now, cooling off is at the top of everyone’s list. I love taking photo’s in the pool and at the beach. And I really enjoyed creating this layout. 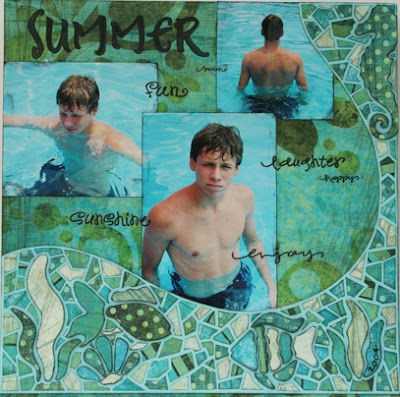 (try double clicking on the image to see a larger view)
I wanted to create something that mimicked a mosaic design you might find on the side of a pool. So I shopped for a stencil that had fish shapes. I found 2 stencils made by Plaid and they became my inspiration. I started by using a flexible ruler to plan my mosaic area around my photos and then cut the curved edge of the base paper that I would be laying my mosaic out on. I selected my pattern paper, traced and cut out the individual peices of the stencil shapes I decided I wanted to included on my mosaic. After I decided where I wanted my stencil shapes, I lightly adhered the shapes to my base and began planning the rest of the mosaic peice. I'm sure there has to be an easier way to do this, but I rarely do things the easy way (hehe). I used tracing paper. I started with the first group of shapes to the far left. I layed the tracing paper over the seaweed, fish, and clam extending it over the edges of the page and egde of the mosiac peice above. I used painters tape to hold the paper in place while I was working. I traced the stencil shapes and then began designing the surrounding tile peices. The first line I sketched on the tracing paper was approximately 1/16" border around the edge of the shapes, which represented a gap for the "grout" and established a start line for the rest of the tiles. I worked my way out from this point. The tracing paper became my pattern for cutting my tiles. Once I felt confident with the surrounding tiles, I inked and secured my shapes. I wanted them to pop up higher than the surrounding tiles, so I mounted them on chipboard. Then I began cutting, inking, and adhering the surrounding tiles. I think one of the reasons that I like this particular mosaic peice so much is the patterned paper and the way it was distressed in nature, and had coordinating shades. I'm not sure it would have turned out the same had I tried this with just plain cardstock or if all the tiles had been the same shade. KWIM. So I do owe part of the inspiration for this layout to not just the cool stencil, but the patterned paper as well. Adjustments were made along the way and sometimes I would mess up and have to cut a tile more than once (did I mention I'm a detail freak?). But the result was a peice I was very pleased and proud of.

I hope you enjoy it and are inspired to create your own mosiac. Let me know what you come up with. And if you are interested in a class that teaches this technique, email me.
Have fun and stay cool! Melisa
Posted by Melisa Waldorf at 7:24 PM

Hey girl! I love this LO. I remember when you were working on it at TCS. This is beautiful! ~Tori

Great layout Melisa! You should come teach me! I miss you. Let's chat sometime!
Lisa

Melisa - you continue to amaze me with your talent - I've always loved the creativity you put into this piece!!!

WOW! Love this art work! Perfection! You are an inspiration!

You've been tagged! Check out my blog!

Hi Melisa,
I just wanted to pop in and say that I'm looking forward to meeting you at SVC in about a week!
It's going to be such a blast!
Take care in the mean time :)
C-ya there!
Tessa

Melisa,
Sorry for contacting you this way, but I don't know what else to try. I've emailed you back about 4 or 5 times. My emails say they went through, but either they are getting could in your spam filter, or lost somewhere in web space! : ) I would be happy to cut one of my house albums for you. I am cutting some on Monday. I REALLY appreciate your email and comments supporting me rights as the album designer. I am meeting with a copyright attorney next week to discuss my options. Anyway, If you want to paypal me at my same address it's $12.50 for the album and about $6.50 for S&H. Sorry for the communication problems! Camille

Melisa, this is awesome. So cool you teach at scrap n stuff now. See you around. happy scrapping

wow! how old is that boy? hope he isnt too young, hes hot.

Chloe17 : Your freakin' me out chick. That's my baby boy and he's legal, 21 now. He was 17 there. Forget the hot guy, your supposed to be checking out my hot technique.